The workshop took place at the Ministry of Economic Development in Rome on 16 February 2017. During the workshop the issues addressed, with the two key-note presentations by Catia Bastioli, Kyoto Club President, Member of the European Commission’s DG Research European Bioeconomy Panel and by Gianluigi Angelantoni, Kyoto Club Vice president, were the latest EU legislation on decarbonization and circular economy / bioeconomy and the relevant Italian technological updates on both. 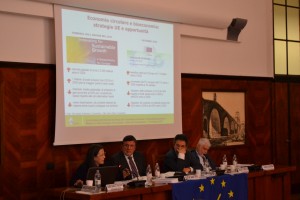 The meeting has been opened by Stefano Firpo, Director general for industrial policies, competitiveness and SMEs of the Ministry for Economic Development, who has elaborated on the efforts by the current Italian Government on both sets of topics. Participants – who have included officials from the Economic Development, the Agriculture, the Environment, the Environmental and Cultural Goods Ministries and the Prime Minister’s Office; university, trade union and private companies’ representatives; the Bank of Italy and Intesa San Paolo Bank – have lively contributed to the discussion, sharing own experiences and perspectives, as well as specific technologies addressing carbon neutral development and bioeconomy patterns.

During the round table, three main speeches have provided inputs: Ilaria Borletti Buitoni, Undersecretary of State at the Ministry for Environmental and Cultural Goods, stressed the value of landscape as framework for sustainable development, emphasizing the importance of immaterial goods for all economic activities. Erasmo D’Angelis, Head of the Prime Minister’s Office Department for hydro-geologic risks argued for the need to safeguard soil and water management which, also in close connection with climate changes, will play an always greater role in near-future territorial planning. Gianni Silvestrini, Kyoto Club Scientific Director asked for higher ambitions in governmental, but also the private sector’s, policies in taking advantage of the opportunities offered by global warming, particularly for a country like Italy. Francesco Ferrante, in his closing remarks, reminded participants how decarbonization and circular economy / bioeconomy are two sides of the same policy priority. He finally reviewed the proposals outlined in the two keynote presentations and detailed the impact each of them could have in terms of quality growth and new employment.